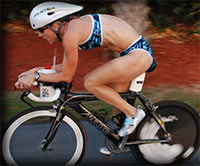 In 1981, Quintana Roo founder Dan Empfield competed in one of the first Ironman events on Hawaii’s Big Island. As a pioneer of the sport, he envisioned a bright future for it, but felt something was lacking: High-quality equipment that accommodated the serious needs of triathletes. He decided to provide the solution by starting a company named after one of his favorite places on the planet, Quintana Roo, Mexico.

The first creation was a wetsuit designed specifically for triathletes. As these wetsuits began to show up on triathlon starting lines around the world, he noticed a gap on the road as well. Triathletes’ main options were road bikes adapted with poorly-fitted aero bars. Dan decided he could do better and in 1987 Quintana Roo released its first bicycle specifically built for tri.

That bike, the Superform, was revolutionary. It came with aero bars, unique angles, a brilliant ride, and a whole new look and feel.  But when Quintana Roo sent Ray Browning to Ironman New Zealand to compete on it, he was ridiculed for bringing such a strange-looking machine with unorthodox geometry and parts to the race. He (and Quintana Roo) proved all the naysayers wrong, as he came off the bike with a 30-minute lead and went on to win the race.

Soon that QR had been copied by others many times over. In the years that followed, many companies have claimed to be contenders, but none has shown the focus, dedication and insight of QR, and to this day they are renowned as one of the finest tri bikes you can buy (their wetsuits are highly sought after too).

We stock a wide selection of Quintana Roo bicycles and we look forward to helping you pick your favorite. Swing by the shop for test ride soon!

Check out our complete selection of Quintana Roo bicycles.